Something is holding you back from achieving at a greater level! Its possible that it is either vision or trust. Vision and Trust aren’t mutually exclusive entities. However, it is helpful to have at least one of them present at all times. 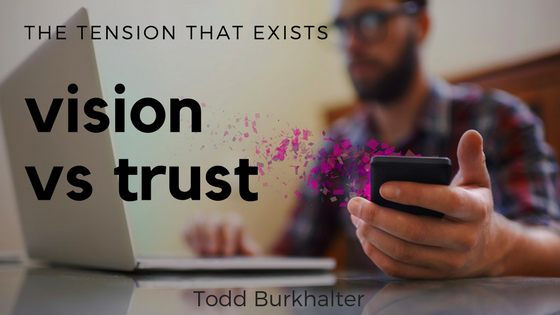 Lacking vision or the ability to look beyond current reality can lead to missed opportunities. A great example comes from a story my father often tells about himself….. Now, somewhat laughingly.

Years ago, I believe I was about 4 at the time, my dad was wanting to invest into Real Estate. He mentioned to a poker buddy that he was looking at land and had his eye on a neighborhood lot in Conyers, GA; $16,000. The Poker Buddy, a much older man and very successful, said that he had a lot for sale on Lake Lanier and that he’d sell it to my Dad for a better than normal deal; $9,000.

So, Dad being excited about the opportunity went to take a look at the Lake Lanier lot. As he approached the lot there was an unsightly old bus, rusted out, over grown with weeds located right in the middle of the property. His excitement for the investment quickly waned. All he could see was that bus! All he could think was that he was going to have to do something with that bus! He also laughs about the thought of telling my Mom that he had spent their savings and they now had this bus to deal with. Their future dream spot, next to the bus:)

He ended up choosing the more pristine, more expensive neighborhood lot in Conyers. For those of you not from Atlanta; Conyers is a fine community but has never materialized into its full potential. Some of my childhood memories are of us as a family reluctantly driving down to see our lot and just look at it, in Conyers….. in the middle of this Ranch style community. Dad ultimately sold it for a modest profit.

And now the rest of the story……

There is a good chance that you may have visited that same Lake Lanier Lot. Quite a bit later it sold for several million dollars. It is now the location of the entrance to Lake Lanier Islands. A large lake resort with hotels, conference center, restaurants, marinas and golf course.

A lesson that our family repeats often, Sometimes you have to look past the bus. 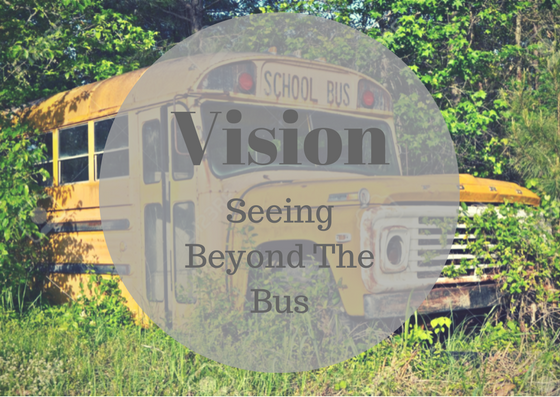 No disrespect to my Dad because he has been successful over the years but not in this particular instance. He didn’t have the vision to see the possibilities. His entire focus was on the bus not the opportunity. In my profession its a common condition that I see often; focusing on the worst case scenario more than the best case scenario.

It is important to have a team of people around you who are successful. Tony Robbins says that you are the sum of your 5 closest friends. Having a relationship with them as friends or advisors provides you with resources and experience in areas where you may be lacking. Having resources and trusting in them will allow you to have success when there are times of uncertainty. Trust in the wisdom of someone who has gone before you.

Most Americans have a majority of their Net Worth tied up in a retirement account or their home. Most do not have huge investment accounts yet. Either way, they have never seen, first hand, the massive impact that taxes have on an investment. Their IRA/401(k) investments are still being deferred; therefore, the tax problem which exists has yet to be realized.

Over my 20+ years in business I have always stressed to our members the importance of investing into Tax Free Opportunities.
Yet, in the early stages of life it is common for investors to lack the vision of a time when they will have massive accounts. Later in life when accounts are huge; the tax ramifications can also be huge. However, most ignore the Tax Free message since they do not have the experience of it being a major problem (and neither do their friends).

To reference our earlier example the bus in this case represents today’s problems or desires which may be avoiding the tax today on small investments. Thus also lacking the trust and vision to avoid the tax on the massive amounts down the road.

The Intersection of Vision and Trust

A lack of vision and trust is a recipe for never reaching your full potential.

As you invest have the vision to “look past the bus” towards a time when you could reap millions from your investments.

Trust in your diligent investing and in the knowledge of those ahead of you. Have faith that you will win longterm.